CAPCOM has just confirmed a ton of details for Resident Evil Revelations 2, which will be released as a weekly series of episodic downloads before it hits retail stores in early 2015. Each episode will offer “hours of gameplay” (featuring

Things are looking up for the Year of the Sheep. According to 343 Industries and Microsoft, 2015 will see the official release of Halo 5: Guardians, the next installment in the history-making video game series. Halo 5: Guardians will run

It’s sad to see the end of an era, especially one that involves some of the best and most classic video games ever. Hiroshi Yamauchi passed away today at the age of 85. He was president of Nintendo from 1949

Microsoft has announced a remake of Blake’s 7 is coming exclusively to Xbox Live! No longer content to provide access to services like Netflix and Lovefilm and other stream-ready media, Xbox Live will now produce original content. The first show

The words will ring in your ears… “What are you doing?” “Killing monsters.” And so we once again meet Geralt of Rivia, the hero of the RPG series The Witcher, based on the fantasy short stories by Andrzej Sapkowski. Geralt

Running on Empty? Fill up with EVE! Our good friends over at NECA have announced the release of two awesome BioShock 2 items: the EVE Hypo Replica and the Crawler & Ladysmith Splicer Action Figure 2-Pack! Whether it’s their Motorized

Capcom announces that it’ll revive Strider for Playstation 4 and Xbox One early in 2014! The 2013 San Diego Comic-Con is here and already the big reveals are starting to roll in. SDCC is never short on surprises, and for

With declining PC sales and more focus than ever on mobile and console games, is computer gaming coming to an end? The answer to that question is probably another question. Do you still like to game on your computer? If

The first gameplay footage from ‘Grand Theft Auto V’ has surfaced, showing off the series’ most expansive world yet! Controversial, exciting and always a ton of fun, the Grand Theft Auto franchise helped reinvent the way players think of open-world

Metal Gear Solid V: The Phantom Pain is in development now for Xbox and PlayStation! The video game world is still reeling from this year’s E3, which was probably the biggest yet. As Sony and Microsoft continue to duke it

The 2013 Electronic Entertainment Expo is being held this week in LA! The lucky souls at this year’s E3 at the Los Angeles Convention Center are getting a glimpse at the future of gaming. With next-gen consoles like the PS4

The Legend of Zelda: A Link to the Past 2 Coming this Holiday Season!

Prophets that they were, Boyz II Men once told us that “It’s so hard to say goodbye to yesterday.” Well, I’ve logged over 150 hours over the course of three separate games of Final Fantasy IV for (my wife’s) iPad.

It’s Been a Long Time Coming To say BioShock Infinite is hotly anticipated would be an understatement. We’ve already got the action figures, the Columbia statue, and the Sky-Hook replica. And at midnight, we’ll have final piece in the puzzle: 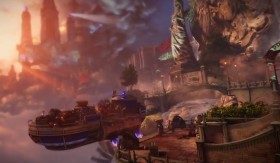 Today Irrational Games released a brand spanking new trailer for BioShock Infinite, and we’re more excited than ever. It showcases more gameplay, and highlights the sinister dark side of the floating city of Columbia. If you haven’t seen the new