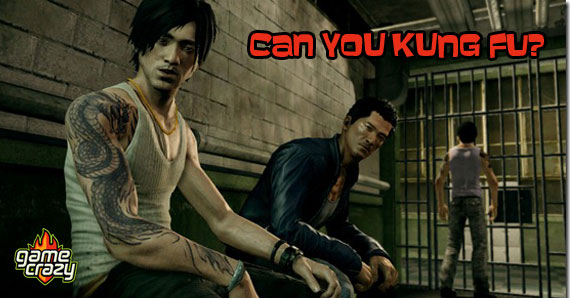 I love sandbox games. The ability to run around everywhere is a feature that every game should have.  Just think how awesome Tetris would be. I imagine it would be kind of like Minecraft. Open world games have been on the rise since the Grand Theft Auto series made it popular, and it’s been copied and tweaked until now it’s just a mechanic like, say,  having guns in your game.

Seriously, we take it for granted a game will have guns, but someone had to be the first right? 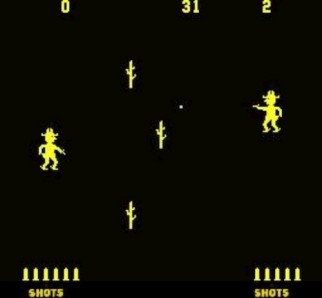 And for the nerds, we bring you that game: Taito’s Western Gun.

And speaking of guns, another thing we’ve started to take for granted in games is the so called “bullet time” – where you can slow time down to get that stellar head shot. I’m not sure who originated it in games (maybe Max Payne?), but we’re all familiar with it now. 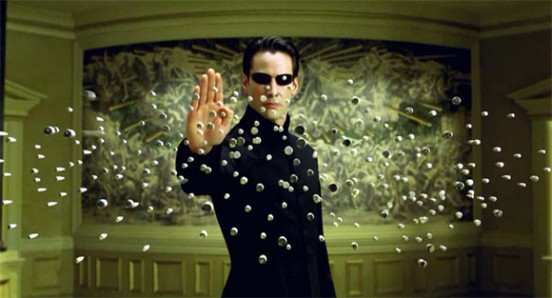 There’s a law that says you have to post a picture from The Matrix when you discuss bullet time.

A lot of the things we love in games were once novel concepts that have been copied and redone so many times, we just take them for granted. Ask any old school gamer about it. They’ll be happy to tell you that back in their day, they didn’t have auto regenerating health. Hell, you barely had health at all. And if a game did have a health bar, practically the only way you could refill it was if you stumbled upon some Mystery Wall Chicken.

The point is, all games are derivative of games that come before them in some way. It’s inescapable. There will always be a mechanic that came before it. And we shouldn’t let the fact that a game takes elements from several  other games hold us back from seeing it’s own beauty. It’s also why you should really play Sleeping Dogs. 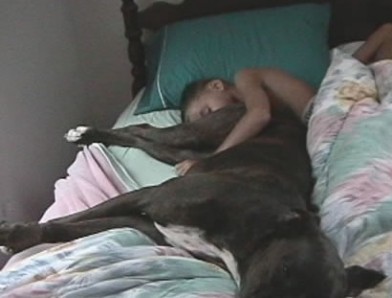 The Making of a Sleeper Hit

Sleeping Dogs is getting great reviews, but there are those who feel they must criticize. Let’s nip that in the bud right now. I know Sleeping Dogs has had the worst development hell since Duke Nukem Forever, but thankfully, it didn’t have the same outcome. Sleeping Dogs is awesome and a joy to play. I imagine the conversation went like this:

Person 1: “Hey, this Grand Theft Auto game is fun. But the melee fighting is garbage.”

Person 2: “Hey, this Batman game has awesome fighting, but the open world nature of the game is a little questionable”

And Sleeping Dogs was born. It takes all the awesome martial arts action you want in a martial arts game and makes it really, really easy to pull off. Over the top car chases, fantastic shoot-outs, fantastic shoot outs while jumping from one moving car to another in an over the top car chase; this game has ACTION stamped all over it. It has a story about the Triads in Hong Kong, but it’s little more than setting. It’s great for a video game, and not as over the top as GTA stories tend to get, but do we ever talk about the finer plot points of Die Hard? No. It’s about explodey things, and shooty things, and yippee-kay-aying motherf—ers.

And Sleeping Dogs is all about those things.

The little nods to classic kung fu movies are all over the place, including in the cast. Speaking of which, this is a pretty awesome cast. Lucy Liu, Emma Stone, Robin Shou and a host of others all lend their voices. Though every time Robin Shou‘s character comes on screen, I find myself humming the Mortal Kombat theme.

Simply put, if you love the kung fu scene from any movie, and especially if you like John Woo movies, then check out Sleeping Dogs. They may say to let sleeping dogs lie, but you’ll definitely want to pick this one up. Square Enix took a lackluster game from Activision, and turned it into a sparkling diamond in the midst of an ocean of terrible games.