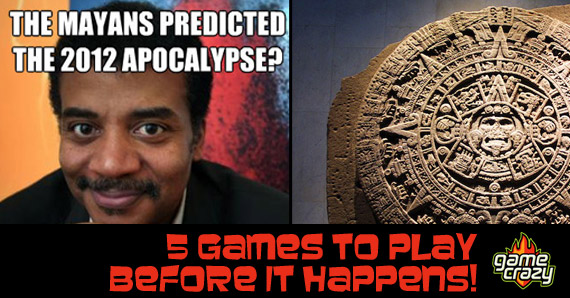 The world is coming to an end! At least that’s what the Mayans have to say about 2012 (them and all the nut jobs who have nothing better to do on a Saturday night). How should you prepare? By gaming, of course.

Let’s take a look at 5 games you should play before the world comes to a fiery end.

The grandaddy of all post-apocalyptic RPGs, Wasteland had it all. Its deep story and rabid fan base even helped kickstart a sequel. The concept was good — years after nuclear war, you send out Desert Rangers to bring peace to the land. Too bad no one wants peace.

Not only can you blast away robots with a Meson cannon, you can take the Wolverine route and turn your enemies into paste with the Proton Axe. Wasteland has everything you could want in a game — humor, an engrossing story, and “Harry the Bunny Master.” 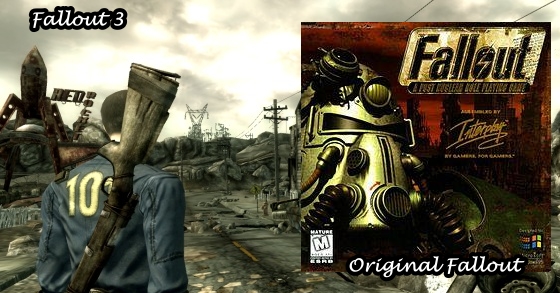 The original Fallout was a masterpiece. Originally designed to be the first GURPS game, the license was pulled at the last minute and we were left with the highly impressive “SPECIAL” character system and an even more amazing game! The concept was great — your group’s been living in an underground vault for hundreds of years when the water system breaks; your task is to go out into the wasteland to find a replacement.

Much like Wasteland before it, Fallout offered lots of areas to explore and very memorable plots. Some interesting concepts came from Fallout, like the possibility of getting addicted to a substance. Killing bad guys was just the tip of the iceberg. There’s also a hilarious tribute to Monty Python and the Holy Grail, which ends in your death if you get the question wrong (hint hint).

Not into video games? Then give ZOMBIES!!! a shot — it’s a “board” game that does a good job making life sucky for humans. The “board” actually consists of small cardboard squares that each person flips over, making the final board different every time you play it. Not only do you get a chance to kill zombies (and hopefully get away in the helicopter), you get to control zombies to try and eat the other players!

Easily the best of the Gears series, you and Delta Squad are fighting the Locusts on the war torn planet of Sera. Taking place six months after the end of the first game, you’ll find that there’s only one safe human city left: Jacinto.

The game itself uses a unique cover system that requires you to play defensively as well as offensively. Modern Warfare players will struggle with this since it isn’t mindless, but it’s a very good system and should challenge veteran first-person-shooter gamers. And if you’re not into the campaign mode, switch over to HORDE mode, where you try to survive 50 waves of bad guys!

What better way to celebrate the end of the world by playing a cute game with zombies? The idea is simple — zombies are attacking a house, so you and the plants need to band together to create a defense! The Sunflower will generate extra sun (currency), the Wall-nut will temporarily stop the Zombies, and your Pea-shooter will blast them to smithereens. Plus there’s nothing more satisfying than using the DOOM-SHROOM to nuke an entire group of undead.

The undead are no match for flower power!