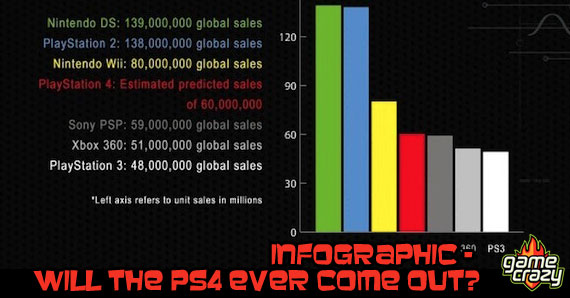 Where’s the Next Generation?

The Xbox 360 and the Playstation 3 have been on the market now for quite some time; in fact, they have both had a lifespan of more than seven years. This generation of consoles has been around longer than any previous generation.

Well, as explained in this infographic by Ladbrokes Games, the PS4 is rumoured to have production costs of $1000, yet a retail selling price of more than $600 less that that. With this amount of loss built into the console selling strategy, Sony is taking a huge amount of risk by releasing a new console.

They have to be very savvy and make up the money lost here in other ways, such as through game and peripheral sales. How can they do this? Check out below:

By releasing the Playstation 4 and Xbox 720, Sony and Microsoft are taking a lot of risks. Although some improvements may help bolster sales, other aspects of the newer consoles may drive some gamers away. Even though big developers like EA are begging for newer consoles, that business model is yet to be figured out.

Do you think they will come out, and if so, when?