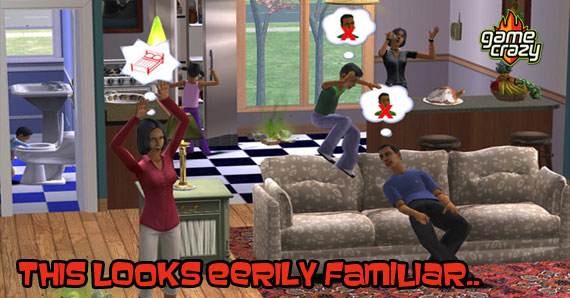 One of the major attractions of advancing video game technology is the level of realism it brings. Who can forget the first time they saw a 3-D character model instead of a flat sprite? Sure, they looked like deformed Lego men, but it was 3-D! Now, realism in games has come so far,  you can see your enemies hopes and dreams fade from their eyes as you stab them to death in Modern Warfare 3. Used to be, you had to put a code in for that kind of arterial spray.

However, it’s not just extreme violence that’s getting more realistic. In some ways, video games have started to mimic reality in ways no one could have predicted. If you’re a long time World of Warcraft player, you may remember the Corrupted Blood Incident. Blizzard introduced a boss who cast a spell that was pretty much insta-death after a few seconds. It was never meant to be able to get out of the area where it was found, but much like dinosaurs in a modern amusement park, it found a way to break free. The spell got so out of hand, WoW actually suffered a pandemic. Most people were doing everything they could not to be infected, while other players preferred the role of Orc Typhoid Mary and did everything they could to spread it further. It took several patches and resetting the world several times to eradicate the contagion.

The actions of players so closely resembled real world behaviors, epidemiologists and anti-terrorist organizations took note. They used the incident to examine how diseases are spread, how people react to it, and how a terrorist organization could potentially spread diseases purposefully. Even the Center for Disease Control wanted to see the numbers. While it was just a game, it mirrored a deadly real life potential.

The Economy of Games

There’s no doubt that Valve’s Gabe Newell is a pretty smart guy, and more than capable of thinking outside the box. This is the guy who founded the studio that gave us Half-Life, the game about destroying things with a crowbar. Oh, and let’s not forget about Portal, which…Hey, have you seen the Portal Gun replica? Anyway, so now that we’ve agreed that Gabe is a pretty smart guy, you shouldn’t be surprised when I tell you the newest member of Valve is an economist. Economist, as in he figures out how cash flows in societies. Yanis Varoufakis received a random email from Newell who asked him to help merge and develop their virtual economies. It had plenty of appeal. A closed market where every single transaction is documented is like an economist’s double rainbow. He stopped by Valve while visiting the states, was impressed with what he saw and intrigued by the opportunity. So now he’s working with Valve and has a weekly blog column with them. it’s a win-win for Varoufakis, Valve, and all of the loyal Valve fans.

Those are just two examples of many. As more and more people spend more and more time online trying to escape their real life, it’s only natural that our digital experiences will start to more closely resemble our real lives. While we think of video games as fixed environments, they’re not. The digital domain is starting to become more like real life in an effort to keep us ensconced in the illusion. And as game makers strive for more and more expansive and involved worlds for us to get lost in, these digital planes are going to more and more reflect the mortal plane in unexpected ways.