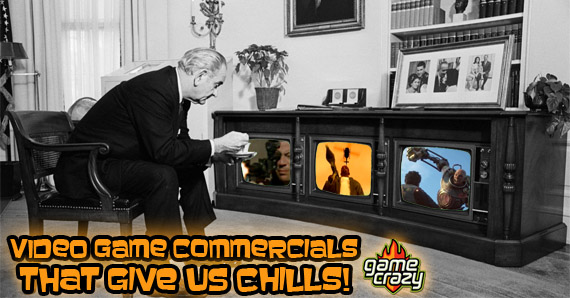 As video games have advanced over the years, so have video game commercials. They used to be boring ads that were about as exciting as watching paint dry. Sure, they might have had celebrity endorsements, but since video games were still considered a “kid’s toy” back then, the celebrity spokespeople seemed just as bored as the viewers. Just take a look at this ringing endorsement from a 1980s William Shatner for the Commodore:

These days, the video game industry is booming with high-powered hardware producing gaming experiences that we could only dream about back in the day. And video game ads have to be almost as powerful as the games themselves. For example, BioShock Infinite:

When you watch those two commercials back to back, it’s obvious that times have changed. That BioShock Infinite commercial gave me chills the first time I saw it. That’s what a video game commercial should do, give you the chills. It also made me think about other commercials that gave every gamer in the room goosebumps and had the non-gamers saying “That was a video game commercial?!” Here are three ads that did just that when they first aired.

Now, that’s a video game commercial! Back when this first aired, every gamer knew it was for GTA: San Andreas the instant it came on and the name “Rockstar” appeared on the screen. Gamers got to sit back and watch non-gamers be wowed by modern video gaming. I’ll never forget the time I watched this commercial with my dad. He said, “What movie is this?” The look on his face after I told him was priceless.

With the right ad, even a basic “run and gun” video game like Gears of War can seem filled with deep and dark emotions that go beyond the traditional video game experience. If I were a non-gamer, this is the kind of commercial that would make me think “Man, this is what I’ve been missing? I need to start playing video games.”

This commercial doesn’t show the video game. It doesn’t even show a computer-animated trailer: it simply assumes that those of us “in the know” already recognize Call of Duty’s awesomeness. The treatment of the cameos by Kobe Bryant and Jimmy Kimmel only reinforce this attitude.

Kobe and Kimmel don’t say “Hey, play Black Ops, it’s great!” No, they participate in the action and the message becomes “There’s a soldier in all of us.” It sends the message that video games aren’t for kids anymore: adults (even celebrities) are welcome to join in the fun.