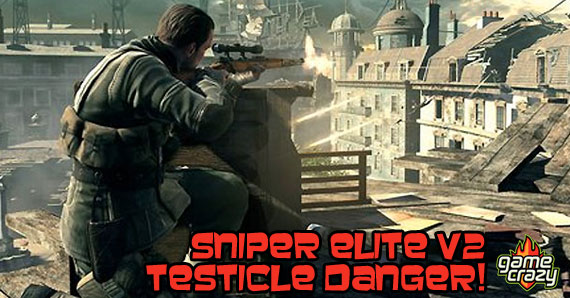 Sniper Elite V2 isn’t a new game, and this really isn’t a review. It’s been out for a few months at least, but today it hit the Xbox On-Demand and PSN stores. This little gem has been acting too much like a sniper and slipping quietly under the radar, which is a damn shame, because this is a fun little game that you may want to check out. For pure sniping mechanics, this is THE game to play. 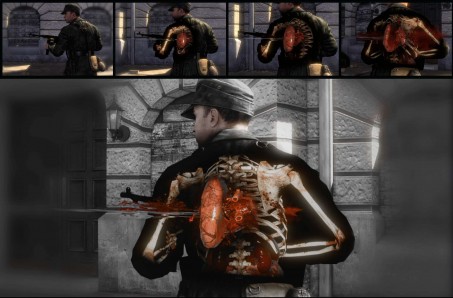 That’ll put a damper on your day.

Sniper Elite V2 is a remake of an Xbox original called appropriately enough, Sniper Elite. V2 has a different story and better graphics, but that’s not the selling point here. The highlight of this game is it’s shooting mechanic. Sure, you can use pistols and assault rifles and booby traps, but the game is called SNIPER Elite, and sniping people out is where the fun starts.

One of the main features of Sniper Elite is the realistic ballistics, involving factors such as bullet drop, wind strength, and the effect of holding one’s breath when attempting a shot. Sniping gameplay is from a first person scope view, whereas movement and use of all other weapons is in third person view.

But the absolute best part is the kill-cam. Every time you kill someone with the sniper rifle, it follows the bullet and shows the hit in excruciatingly slow motion. And if you’re really lucky, it’ll show an x-ray view of the kill. Depending on where you shoot the enemy, you might get an x ray shot of a skull shattering, a heart spraying apart, or my personal favorite, a pair of testicles exploding. Seriously, nut shots are not only encouraged, they’re rewarded.

Sniper Elite isn’t the prettiest girl at the ball, but the developers seem to know it, so the price tag on this puppy is ten dollars less than what you’re used to paying. That means for $50 you get a remarkably accurate sniping simulator that offers more than a few moments where you’ll just stare slack jawed at the super sweet kill you just pulled off in slow motion x-ray.

What more do you want from a game about shooting things?