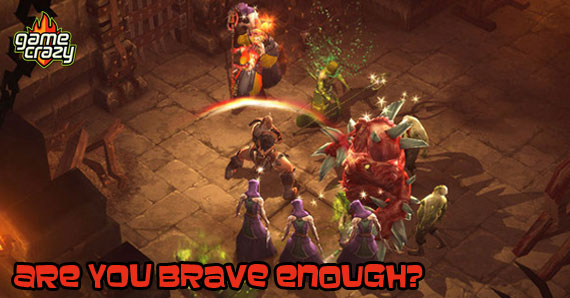 I hope you learned something from last week’s Diablo 3 Surviving Hardcore Tips, Part One. Part Two will dissect and discuss the following:

So, without further ado, here are the rest of our tips on how to survive Hardcore in Diablo 3.

Since Potions have been gimped (you can only use 1 per 20 seconds or so), you simply can’t rely on them to keep you alive. You have [6] hotkey-buttons to activate your skills and powers — at least 2 of them should be dedicated to some sort of healing effect. All healing skills have some sort of cooldown, so you’ll need to learn how to manage their usage, but you don’t want to be caught in a fight where you can’t use your potion (because of the cooldown) and you’re unable to run away.

Weapons or rings that give you Life-per-second can also be very powerful, but usually you need a Monk’s Mantra of Healing to boost that effect to make it worthwhile (it certainly doesn’t hurt though). For melee fighters (Monks and Barbarians), having Life-per-hit equipment can also help quite a bit.

Here’s one of those things you won’t find out until you’ve been playing a while — Diablo 3 SCREWS YOU when it comes to equipment drops. The fact is that you will never find an item that is appropriate for your level; you will only find items that are 5-20 levels beneath you. Are you a level 45 Demon hunter? Then you won’t find any items above a “level 40 requirement”. And even the ultimate “legendary items” are not only hard to find but they royally suck compared to magical and rare items.

Don’t even bother with Blacksmith crafting. You can drop 100k of gold and will end up with TOTAL SHIT. That same 100k should be spent on the Auction House where you’d get 3-5 new items that could literally double your existing armor/bonuses.

Need extra gold? Sell the stuff you don’t need (which will be a lot). If you’re going to sell in the Auction House, always sell items that have +Vitality. The Hardcore and Softcore Auction Houses are separated, and in Hardcore people only buy items with +Vitality.

Gems are great, but most are a waste of time in Hardcore mode. When you’re buying items in the Auction house, try to get them with sockets so you can throw an Amethyst (purple gem) in it, which boosts your life. You almost ALWAYS want a purple gem in your sockets. 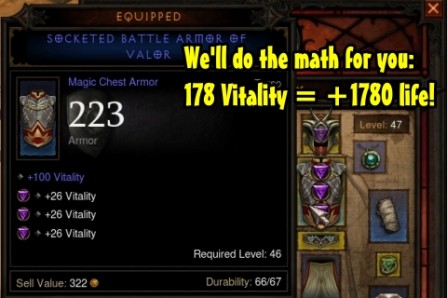 The only exception is socketed weapons, which should have Rubies (red gem) in them to boost damage.

Templar Is Your Friend

There are three ‘mercenaries’ you can hire when playing solo — the Templar, the Enchantress, and the Scoundrel. The Templar is the ONLY viable option in Hardcore (or Softcore for that matter). The Templar is very hearty and can stay alive longer, not to mention he’s a melee character so he’ll help distract some of the enemies for you. But most importantly, the Templar has a good set of skills that can help you heal and stay alive. It’s a shame that the Bizzard made the Enchantress and Scoundrel so damn useless in Diablo 3.

Don’t Be A Hero

It’s very important to know when to run away. Most of the time you won’t need to, but it only takes one bad fight to kill off your character for good. So if something looks too tough, or if you’re losing more life than regenerating, just run away. Unlike the previous games, you can’t just quit at will (there is a 10 second delay), so you MUST LEARN TO RUN AWAY TO STAY ALIVE.

It’s not uncommon for you to run out of potions/healing while taking threatening amounts of damage. You may be good at running away under these circumstances, but if you run into another pack of monsters it would spell certain death. If you entered the area via passageway (cave entrance, stairs, etc), always know where it is — you should run towards it for a fast getaway. Knowing where your Waypoint is will also help, but there’s an extra second delay when using the Waypoint.

If you’re too far away from the entrance or waypoint, always run towards areas you’ve already cleared of monsters. Running away into clear territory gives you time to heal and buys you extra time for the potion cool-down to expire (or might give you a complete get-away).

Again, having the Templar is very useful since he’ll stay behind and keep the monsters busy while you flee like a little girl.

Diablo 3 isn’t a very deep game. It’s dumbed down tremendously from its previous incarnation and just doesn’t feel like Diablo anymore. But that doesn’t mean it can’t be fun. When you start to get bored with Diablo 3 (which is sooner than you think), give Hardcore mode a try.

Having permadeath is the only way to play in this writer’s opinion.