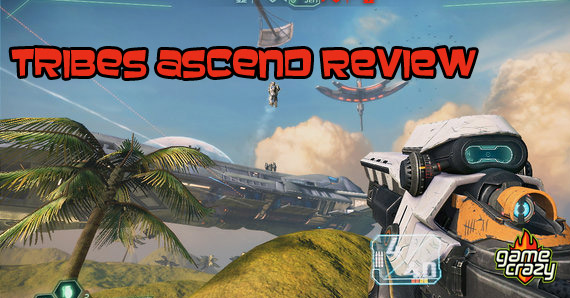 Tribes is back, and it’s free to play. This is the fourth incarnation of the Tribes franchise (on the PC), with yet another new developer. We’ll jump right to it. For the purpose of this review, I’ll address certain points and use a school-grading system (A is great, F is fail). Note that this review is based on over 20 hours of playing the final/non-beta version of Tribes Ascend.

Whereas most players are used to the running around in Modern Warfare, Tribes gives you a jetpack with vast outdoor maps. While the left-click of the mouse is used for firing, the right-mouse-button activates your jetpack for flying, and it works very well. The flight-aspect of the game has remained the same from as far back as Tribes-1, and new developer Hi-Rez has smartly kept it the same. This is easily the most defining aspect of Tribes, as no other FPS has come close (or even attempted) to pull it off. There was one notable change to this though — the grappling hook from Tribes: Vengeance is gone, but it won’t be missed at all.

The ability to “ski” is also back, and now it’s more powerful than ever. Back in Tribes 1, players would constantly tap the “JUMP” button while going downhill, causing a “skiing” effect for fast movement. As the player would hit the bottom of the hill and start going up another, they would activate their jetpack with a huge flight bonus (thanks to the skiiing momentum). Tribes 2 built this into the game so it wasn’t just a ‘bug’, and Tribes Ascend has taken it to a whole new level.

Not only can you “ski” down any hill while holding down the Space Bar, you can continue to “ski” on flat surfaces at your existing speed — which basically feels like you’re ice skating. It’s a tremendously liberating feeling in a FPS, and this makes Tribes Ascend the fastest FPS around. Once you start skiing, you’ll have a hard time going back to the slow pace of Call of Duty or Modern Warfare.

In the original Tribes games, you could choose between a light, medium, or heavy armor and equip them how you see fit (with 3 weapons). Tribes: Ascend breaks this formula by making highly specialized classes with just 2 weapons, including a repair gun which now takes up a weapon slot. Sadly, the openness of Tribes has been replaced with a class system that mimics Battlefield 2 or Team Fortress 2, essentially causing Tribes to lose much of its identity.

One of the biggest problems is that all the classes look pretty much the same. You can’t really tell the difference between them once you’re in the game. Even worse is how poorly implemented they are. Once you take a class like a Technician, you’re stuck with a small machine gun (with a very small ammo clip) and a repair gun. The Technician can repair generators and mounted turrets, and most importantly it can deploy portable turrets, but you’re very much stuck in that role. The reason? Your deployed light turrets go away if you change to a different class!

There are few things more frustrating than setting up your turrets and having to stand around defending your flag or generators in the same armor… with a lame small machine gun that does very little damage. And to add insult to injury, if your generators go down, so are your deployed turrets – imagine if the flashlights in your house only works if the main power isn’t out!

The reason for this is pretty apparent: the game is very much focused on fast offense. Scouts (aka Pathfinders and Sentinels) make up the bulk of game play — they’re fast and can grab the flag quickly, with powerful weapons to take out nearly anyone (especially the lowly Technician). The Heavy Juggernaut and Doombringer classes are interesting enough, with the Juggernaut carrying the most powerful weapon in the game — the Mortar. But since the game is so offensive-minded a single fast scout can rip a Juggernaut to shreds.

Oddly, the uber powerful Mortar takes 2 shots to kill a light armored opponent, which makes it terrible on defense and only good for crowd control (and it’s terrible at taking out turrets and enemy sensors).

The Doombringer is also very odd heavy class to play. Armed with a very powerful chain machine gun that doesn’t need reloading (a leftover of Tribes 1 and 2), his second weapon is a missile launcher that takes a full 3 seconds to lock-on to a flying target. While this is fine for Call of Duty, it simply doesn’t work at all in the fast paced nature of Tribes: Ascend; you’ll almost never find a target that stays in the air that long.

The Missile Launcher is really focused on taking out Vehicles, which has its own slew of problems. And to add insult to injury, that awesome “chain gun” the Doombringer sports takes so damn long to warm up that you’re often dead before getting your first shot off. Strange that Hi-Rez would implement such an incredibly useless class.

The worst offense to the class system is the light-armor Infiltrator, a game breaking class that makes you invisible… to everything. They can literally sneak into a place and take out generators with their powerful Spinfusor or sticky grenades, and Infiltrators carry a machine gun that’s more powerful than the Technician’s small machine gun (a class designed for defense and repair). Since they’re light in armor, the Infiltrator can reach the enemy base pretty quickly, and because they’re invisible they can walk past everyone, even other automated gun turrets.

That’s right — NOTHING can see an invisible infiltrator. It often takes 2 or 3 people on defense to hold just one Infiltrator at bay, but that just reinforces the offensive minded nature of Tribes: Ascend. And if there are 2 Infiltrators in your generator room? Then there’s no point in playing defense anymore.

The way the game is now, there seems to be little point in having Generators and medium or heavy classes at all — Hi-Rez should just give everyone a light class only and let them grab the flag. The game really feels more like Capture-The-Flag in Quake II than a modern update of Tribes, because everyone is out for themselves and just trying to kill things.

This incredible unbalance is really the heart of the problem of Tribes: Ascend and turns a once deep Tribes franchise into a shallow game more concerned with speed than substance (literally). On the other hand, if you just want to hop in a light armor and go flag hunting or generator killing, then this is the perfect game for you, since no one can stop you. If you want be a jerk and just sneak in and keep blowing stuff up, then the Infiltrator is perfect for you.

And just to make it worse, developer Hi-Rez has released 2 DLC add-ons that… you guessed it… boosts offense.

Next week will be Part 2 of my Tribes Ascend Review! Don’t miss it.